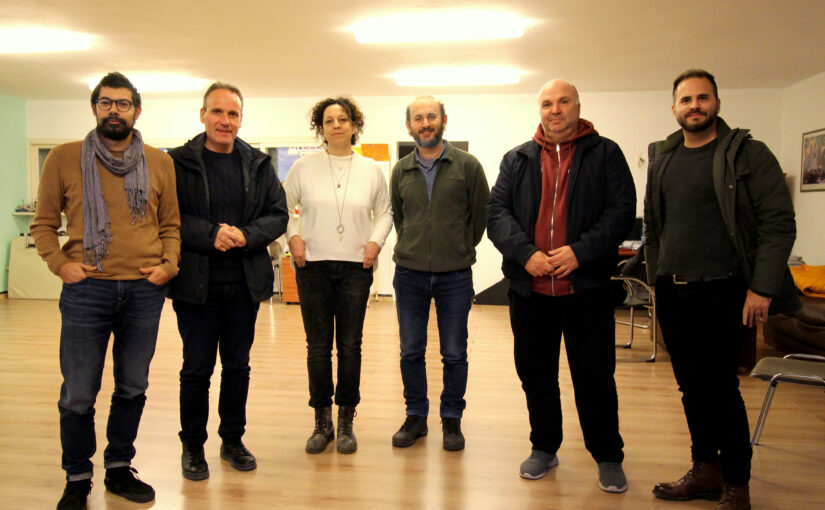 Continuing the cycle of informational meetings on issues related to the operation of our Municipality, candidate Mayor Haris Vekris and the members of the “SYRA, YOUR ROW” group, Panagiotis Pagonis, Iraklis Kailas and Iordanis Papadopoulos, met with Anna Vamvakaris, Presidentand Apostoli Mari, Secretary,of the Board of Directors of the Employees’ Union of the Municipality of Syros – Ermoupolis.

Apart from the well-known problem of understaffing of the Municipality Services, which is mainly due to the general freeze of recruitment in the Public Sector, the discussion of the two sides focused on the investigation of the parameters that could improve both the existing situation in the working environment, as well as and in the general functioning of the Municipality.

References were made to the unsuitability of many workplaces and the possibilities of utilizing the Municipality’s real estate for the co-housing of all its Services, the need to clarify the responsibilities between the Departments, the delay in the crisis process and the amendments to the Municipality’s Organization for the day-to-day service, in reasons for leaving employees through mobility in the State, the margins of project assignment to external partners, as well as the opportunities for inclusion of the Municipality in apprenticeship programs for the employment of the workforce without its financial burden. In particular, for the Technical Services, the issue of the volume of accumulated requests from citizens was discussed, which creates heart attack conditions for the minimal technical staff who – among others – are also charged with servicing the Municipality’s programmatic agreements with other public bodies.

“SYRA, YOUR TURN” believes that the human resources of our Municipality are the most important lever for achieving the goals of each Municipal Authority. Undoubtedly, it is found that there is significant scope for improving the working environment of the Municipality’s employees in the areas of: administration, workplaces, meritorious treatment and motivation, training and skill development, the utilization of the special abilities and qualifications of each employee, but also cooperation relations between Directorates and Departments.

The candidate Mayor Haris Vekris emphasized to the members of the Board of Employees of the Municipality of Syros – Ermoupolis that the priority in the term of “SYRA, YOUR ROW” as the Municipal Authority of the island is the improvement of the conditions and the feeling of fair treatment of the employees of the Municipality, but also the exerting all possible pressure on the central authority for the announcement of new permanent staff jobs, with locality as the main criterion.